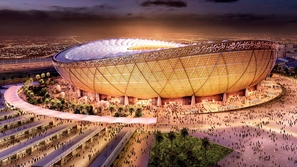 According to a project architect, the location of the FIFA World Cup final on December 18 would offer players and spectators an immersive environment.

Luke Fox, senior executive partner and head of Studio at Foster + Partners, the British company that served as the design inspiration for the stadium, discussed the stadium's architectural development with qatar2022.qa.

The 80,000-capacity stadium will provide an unforgettable experience during the tournament and play a crucial role in the local community long after the FIFA World Cup, according to Fox, who has been involved with the Lusail Stadium project from the beginning through the concept stages. How did Foster + Partners become engaged in the construction of Lusail Stadium?

We received an invitation to participate in a design competition for a potential World Cup location in Qatar in 2009. One year later, the centerpiece of the winning offer was the design that we had originally presented. We competed and won a second competition to remodel the stadium in 2013 once it was determined that Qatar will host the World Cup, working with Arup as the engineers and Populous as the bowl geometry designers. The stadium as it is now reflects our design goals.

Describe the design process in further detail. What were your primary goals?

As the focal point of Qatar 2022, Lusail Stadium needed to have cutting-edge amenities that would make the event an unforgettable one for all parties involved. Our design was based on the idea of establishing a dynamic link between the seats and the field in order to create an intimate and immersive environment for both players and spectators. The goal was to create a single, simple form that would respond to the Qatari environment while the stadium was being built ahead of the neighboring Lusail City. The project also incorporated sustainable design concepts, and we aimed to receive a GSAS (the Global Sustainability Assessment System) five-star certification.

What stage of the process has been the most exciting?

Our desire to design a distinctive venue was sparked by the weighty duty of designing the stadium for the World Cup championship. Also eagerly anticipated are the spectators who will breathe life into the stadium.

What obstacles did you face the most?

The largest difficulty was building a stadium that could accommodate a significant athletic event in the neighborhood. We closely collaborated with our engineers to model and test the stadium so that it could operate all year round while using the least amount of energy possible. The triangular apertures on the stadium's façade serve as a visual reinforcement of the structural diagrid of the bowl as well as a perforated screen to give shade and diffuse light onto the interior concourses.

What does it feel like to be a part of building a FIFA World Cup final site?

We are thrilled to have contributed to this enormous project in Qatar. The World Cup final offers a singular opportunity to create an image of creativity and innovation that is founded in a sense of location, with an anticipated worldwide audience of over 3 billion spectators.

Due to the stadium bowl's intensely atmospheric, immersive, and personal qualities, we hope that the Qatari people, the players, and international spectators will all have a genuinely unique experience. We are honored to have helped the host country realize its goal of providing a top-notch competition venue in such a distinctive environment.