The gender reveal is something of a modern-day phenomenon. Expecting parents that want to discover the sex of their growing baby during a celebration with friends and family. 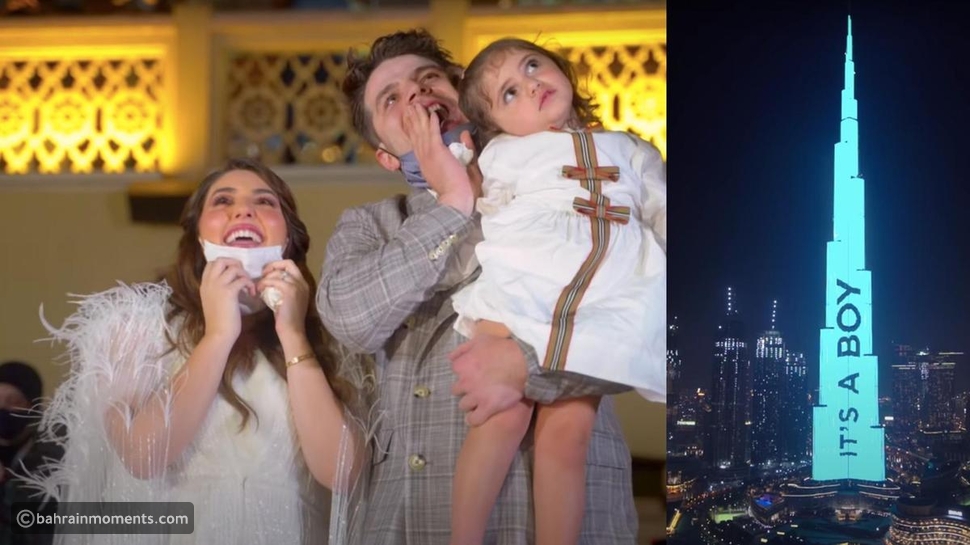 Typically, the occasion is marked with family and private parties. Decorations that are theatrically split open to reveal a pink or blue interior, such as a cake, pinata or confetti cannon.

However, as expected, one UAE couple took the concept to new heights – think really high, by hosting their gender reveal on Burj Khalifa.

Anas and Asala Marwah, who live in Dubai, had the sex of their second child projected on to the world's tallest tower this week.

The couple discovered they were expecting a son after the words "It's a boy!" were lit on the 828-metre tower after a countdown similar to New Year's.

In the video, the couple stated they did not know the gender of their child before the big reveal, with a doctor's confirmation handed directly to those creating the light show.

"I am trying my best to give content that no one has ever seen before," Asala told viewers during the clip, as the family were readying ahead of the reveal. "To me, doing it in this way is something very big."

"I ask Asala every day, 'Who are we to be [reflected] on the Burj Khalifa? Why us and no one else?'," said Anas.

The projection took place at 7.58pm, with the tower lighting up in a striking blue hue.

"My heart is beating, I feel it is going to pop out of my chest and I feel much more excited than my wedding day," said Asala, as she headed to watch the show from a viewing spot next to the Dubai Fountain.

"Regardless if it is a boy or a girl, I love you so much and I hope you watch this video in the future and know how much the Anasala family love you."

The couple, who married in 2017, have more than 7.3 million subscribers on YouTube, and each have more than two million followers on their individual Instagram accounts.

"I cannot express myself because of how happy I am. It is hard to express our joy in words," said Asala, as the reveal was made.